Today I thought I'd take some time out to put down some thoughts about a piece of hardware I've had the pleasure of road testing at work. As such, this blog post is brought to you today by the HP EliteBook 2740p :) 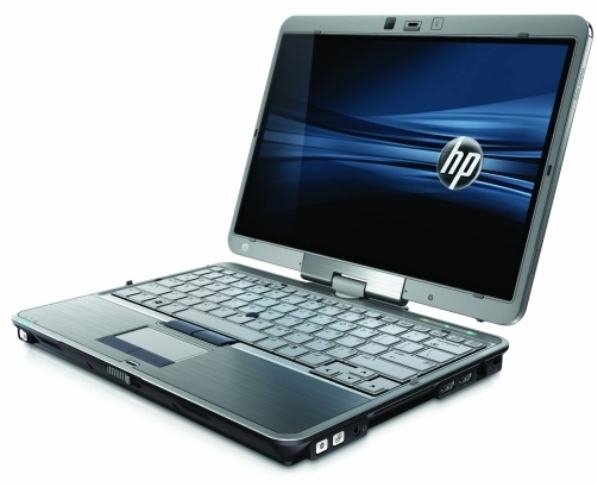 So first things first, what is it packing?

In terms of WEI it earns 7.7 for HDD perf and 6.5 for CPU. Memory and video perf is lower at 5.5 and 3.9 respectively, which is disappointing but with onboard Intel graphics, not surprising. That said, this is no gaming laptop, what sets this puppy apart from the litter is that it operates as a Laptop, a Tablet PC and a Slate.

Initially, I was a little disappointed I have to admit. I guess I expected a game changing device like the iPad to rock my world in such a fundemental way that I had to run out and own one. That wasn't the case at all.  The stylus doesn't seem to calibrate very nicely, yielding a weird parallax effect as you attempt to clumsily click things. The stylus itself is small and flimsy (I'm used to Wacom styli which have the weight and feel of a real pen) and the button to right click doesn't seem to be positioned very well for my hands at least.

On the other hand the touch experience is great while browsing websites or PDF's. Resizing using pinch gestures can be jerky at times though. It's got what we've come to expect connectivity-wise: Bluetooth, Wifi, 3G, USB, eSATA, LAN etc. The dock houses a DVD RW and provides even more connection points.

I think I was disappointed because my expectations where unrealistic; this is more of a baby step for Windows devices, since we dont yet have a desktop OS, or an ecosystem of matching applications that truly take advantage of multitouch. It is a natural evolution of the Tablet computer, rather than a Hybrid Slate. The addition of multitouch capabilities is welcome, but it isn't the focus.

It grows on you

As a laptop, I quickly became accustomed to the keyboard layout. The letter keys have been optimized to be full size, as are the shift keys. This displaces page up and down, insert and delete, home and end to the top of the key surface. Those familiar with Macbooks will feel at home with the Function key wedged in between the left CTRL & ALT keys, but thankfully, you don't need to press this one unless you want the alternative functions (this infuriates me no end with macbooks).

The trackpad is tiny yet useable enough for those times in which you need it. Additionally a finger pointer is installed on the home row in case you prefer that mousing paradigm. After a while I found myself naturally manipulating the screen by touch regardless of whether it was in slate mode or not. Some things work great - scrolling web pages for instance. Another welcome bonus is the LED backlit screen that performs awesomely in direct sunlight. This became a huge bonus while coding on the bus to and from work.

For me, the acid test of any device is how quickly I can get things done in Visual Studio. For this, I installed the Express Edition for Phone Applications and reacquainted myself with Silverlight and XNA for a few hours. Performance-wise it is more than up to the task of running VS and Blend - its actually quicker than my current work PC. Real estate wise - it's OK for punching out a simple Phone App, but I think the 12.1" screen would take some getting used to for long coding hauls.

A multitouch capable PC should be on the shopping list of any would be phone / touch application developer. You can run your phone emulator and interact with it using multitouch just as if you had the phone there in front of you; it was a sublime development experience. Combine that need with being particularly mobile - and I'd say this is definitely your laptop.

Aside: I'd love to know if iPad developers can run XCode on their iPads.

Honestly, this is the biggest drawback. The price is just way too high. Australian consumers can expect to pay nearly $5000 for one at the moment, while the US price tag is around the $1500 mark. Although, in light of current events, this could change any day now. Here's hoping.

I could really see myself hauling this thing around, the versatility is great, and since my bus ride is about an hour each way it would be a perfect way to maximize my productivity. I would also like to write more touch enabled applications and this device is an excellent workhorse on that front. I do wish the stylus was nicer, and that it was a little lighter, but these are minor gripes. When you really need it - you can draw, you can pinch and flick, you can type. The perf is excellent for work, though its not the sort of PC you would throw the latest video games at.

The price is just stupendous for me, and kills the joy somewhat. If I wanted to spend $5k on a PC (and I don't) it would probably have an 'off the charts' WEI and come with an array of 30" widescreen monitors hanging off of it. If HP can bring the price down to around $AUD 1500 then I think we could have a deal ;)